First of two futbol posts tonight, neither of them rantful. We went to Philadelphia for the USMNT-Turkey game, which was awesome. Great atmosphere, actually friendly, large Turkish crowd, which we first started to grok when we stopped at Maryland House on the way up. I've also gushed about Philly enough of late, so I'll spare you that. Besides, as you'll see in the second post, I'm way more pumped about something else.

You know where to go for the USMNT rant, though He buried it in a post that pretended to be kind to United. I agree with him about Spector, don't entirely agree about DeMerit, but I like a center of Goodson and Gooch, so I guess I agree that must. Spector's horrible, though. Even Cherundolo's better. And I do like me some Torres.

Anyway, he asked for pics, so here they are. Forgive the quality--the camera on my Blackberry is not particularly good, and I had to crop these down to get to the good bits. Almost.

We are told that this guy (black jacket) is the Elvis of Turkey. He was in a luxury box right behind us, and multitudes of Turks were throwing things to him to be autographed. Honestly? We have no idea who the fuck he is, but it seemed polite to take a picture. Sadly, I hit the button right after he turned to his left: 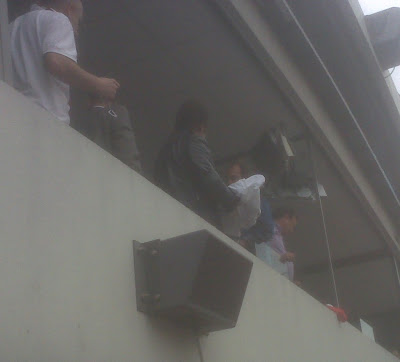 Landycakes, who is somewhere in this photo, just missed:

Wherever you go, there you are, you in this case being Sam's Army.

So there it is. Scroll up for a more exciting post.
Posted by Landru at 8:50 PM